It is Sunday. I’m in a shabby room with no electricity and a thin trickle of water. In the center of Kinshasa, capital of Democratic Republic of Congo. From outside comes the sound of raucous Hallelujah barkers, there is a church on every corner. It is the hard drug to forget the misery of everyday life and enter a sense of hope and togetherness. A luxury in the lives of ordinary Congolese people. Poverty makes people grim, vindictive, aggressive and selfish. It is the atmosphere when you walk in the street, moving in traffic. Everywhere fires – no garbage collecting – vague street deals, stench of rotting food and a suffocating air pollution. From inside the car, the command ‘windows closed’. First impression: a hell on earth.

Almost unreal in a country that has the richest mineral resources of all African countries, which is still relatively uncrowded and whose people have a talent for business. This land is owned by a small group of wealthy billionaires who control police and military and certainly do not share their wealth with the people. After an ongoing delay people wait more then one year for new elections, typical of the arrogance of the elite. The Constitution is simply ignored. But the opposition makes itself heard, it is brewing in the city. And not only because of the permanent traffic jam due to potholes and bomb craters, in which cars yelling and honking trying to move around. But how will protests manifest itself? Everyone is on his own trying to survive. In the urge collectivity and cooperation seems a luxury. A dog that bites its own tail. How do you break a vicious circle to look beyond the immediate self-interest or family interest to survive and make a better future for all?

At the ramshacled theater still with a reasonable wooden floor and with 35 degrees, I’m working on a mission impossible: creating choreographers out of barely trained dancers in 9 days. They are going to work with the theme ‘Hommes et Femmes Progressons e 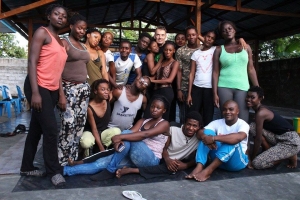 nsemble’, a project to enhance gender neutrality, and sexual education in secondary schools.
And how do I make a group of individuals into a group that works collectively with the theme? Some dancers are students of the Institute National des Arts. A four year program where mostly theory is given for lack of space. Theory on a dance training is fine but it is primarily a physical education! The knowledge about the body, about dance analysis, and quality of technical training is hardly beyond beginner level. Even those who have already graduated from the program. A diploma has cost thousands of dollars, but what has been learned is unclear.
The lack of knowledge is compensated with great enthusiasm and commitment. It is not always functional; the discipline of a lesson with organization of space and concentration on the exercise disappears continuously in a discussion and / or reproach. It sometimes seems that the personal interpretation of an exercise is leading but not the input to find out what  is in the exercise instead of working efficiently with time and space. A parallel with the traffic in Kinshasa where people get stuck together at intersections and won’t give in an inch.

I sometimes do not know where to start and choose for a basic lesson that is repeated every day in combination with exercises in (contact) improvisation. I try to give them guidance to achieve a composition but time is too short. So the forms in class quicly appear in the choreographies. It is rather hard to put a story in a choreography, there is much mime and gesticulation and the stories are too long and are often explained in two movements, clear for them but incomprehensible to any audience.

Along with Guido Kleene, who organized the training we prepare them for 16 choreographies in secondary schools by making photo images as a line of thought for a scenario. It takes many afternoons and everyday we comment in order to improve the result. Sometimes a lively clear scene appears, often they are left in the dark regardless of our encouragements. Yet everyone progresses, and the daily class gets more organized, and people get more fun in doing class. It is still a long way and I am wondering where they stand when I get back in January 2017, to fill their toolboc with new material. Guido Kleene has a positive mood and realizes many projects such as films in schools and a theater tour on a boat along the Congo River. Admirable how he manages to create so much work with daily setbacks.

I say goodbye in a brooding district on a Saturday evening. A balmy evening, where a young party crowd parade in a sensual way along endless bars.Kinshasa is the craziness of 12 million people packed together, hell, and also very sexy.