SPARKLING AFRICAN MIX OF TEXT, SONG AND DANCE
What a pair of characters, these two black actors of Durban’s Poor Theatre Company, both of them portly and good-humored. One of them in polished shoes and a tie, the other bear-footed and dressed in a shirt of colorful African print. In Double U – the most recent Dance Theatre Production of Feri de Geus and Noortje Bijvoets – the two are bosom friends, at the same time representing the period of post-apartheid in Africa: focused on the future, but one leg still in the past. This on one hand happens forcibly – after all, they are not yet, by far, as well off as the whites (double u = w for white) – but on the other hand they choose for that: certain traditions like the consulting of ancestors are part of it, as are the townships. “That’s where I come from”, is repeated proudly many times. The ‘township’ is poverty, but also home, even for those who can meanwhile afford to pay a drink ‘downtown’.
For years, De Geus and Bijvoets have been presenting “intercultural” theatre.The performance they have now made during three months in Durban succeeds wonderfully: it gives a completely credible image of black life in this South-African metropolis. The theatrical form they have found – a characteristically African mixture of text, song and dance- sparkles and shines. It’s well dosed and with no false sentiment.
Throughout, you can feel that the two actors and the seven dancers of the Phenduka Dance Theatre, matched up organically, completely believe in what they are representing here. It is the reality of their lives, and not just a perspective of the Dutch choreographers. After a beautiful, pure dance-sequence, energetic but tense, follows a whispered sequence of atrocities – from hunger to aids, from rape to murder. An ill transvestite shuffles through a group of hip club dancers. It’s a complex witch’s cauldron there, in Durban; video-images and eclectic music underline this. But even though surviving is the strategy to live, and so many things are different, life is simply life, just as it is here. It is the merit of Double U, to communicate this understanding.
Volkskrant, Mirjam van der Linden 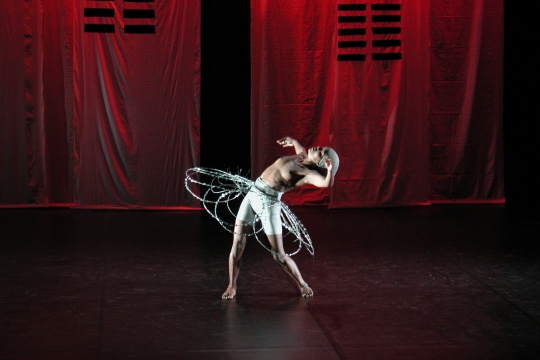 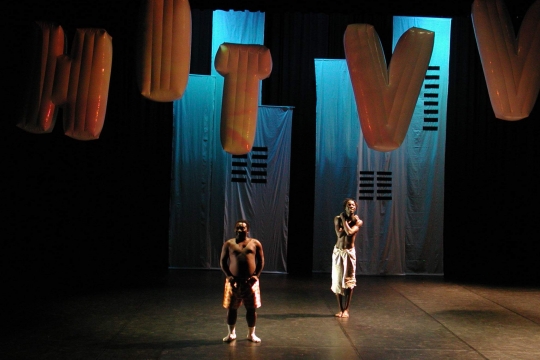 Double U is a co-production with Phenduka Dance Theatre and two actors of the ‘Poor Theatre’ in Durban. The performance premiered at the JOMBA! Festival for Contemporary Dance in the Sneddon Theatre in Durban, followed by another two performances at the National Theatre of Namibia in Windhoek and a tour through The Netherlands. In Holland , the Grand Theatre in Groningen was co-producer.
The production supported by Fonds Podiumkunsten, NCDO-Duurzame Wereld en Centre for the Creative Arts, KwaZuluNatal.